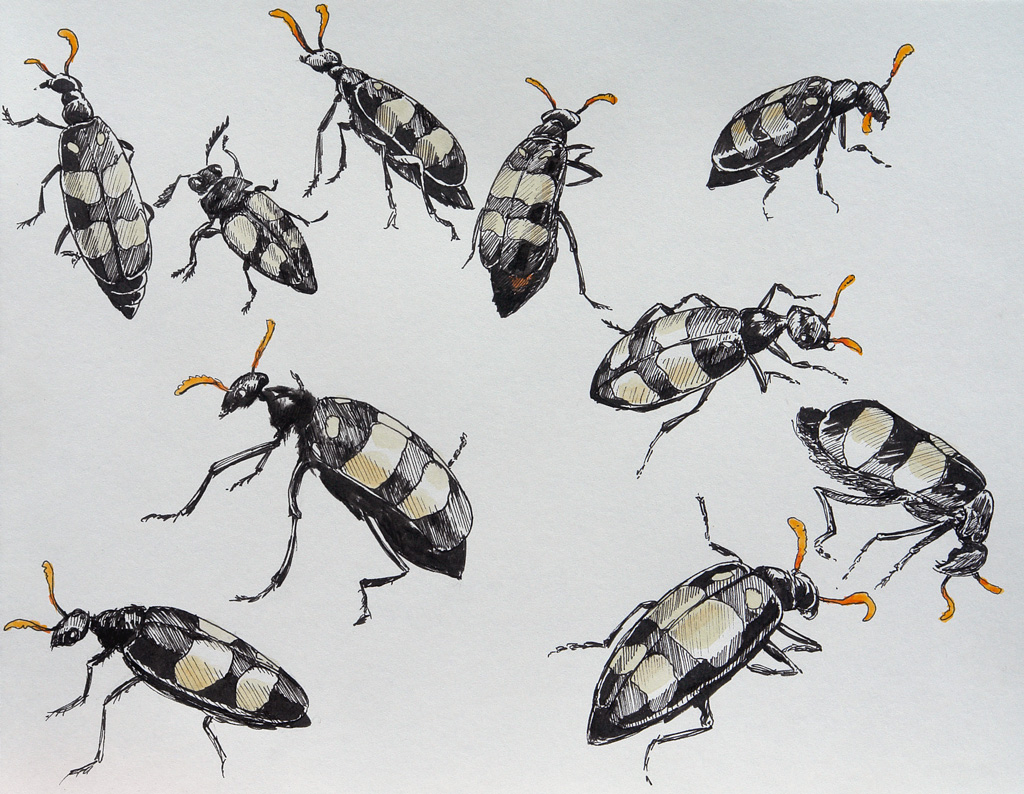 I guess there may be a few of you who have never seen these beetles. They’re called “CMR” beetles, named after the South African “Cape Mounted Riflemen” who had a similar uniform with black and yellow bands. Official name of this species is the Mylabris oculata of the Meloidae family.

As children we used to catch these critters devouring my Mom and Gran’s flowers. So we marched around the garden snatching them off the plants and throwing them into a tin of paraffin. The smaller deeper yellow kind were most numerous, but these bigger kind were a little more scary because of their size mostly. Apparently they’re also called blister beetles, but nothing ever happened to our hands.

Here is an amusing quote:

The largest blister beetle, with either orange or yellow antennae can often be seen on brightly coloured flowers. It feeds on the petals and seems to have no care in the world as it flies lethargically from one plant to another – this is because it has a secret weapon against would-be predators: Cantharadin. This poison oozes from the knee joints of the beetle if it has been captured. The yellow liquid is distasteful and will cause a bird or mammal to release it and from then on the predator will avoid any such brightly coloured beetles. The aposematic (warning colouration markings that make a dangerous, poisonous, or foul-tasting animal particularly conspicuous) colouration of bright yellow contrasting with jet-black signifies that this species is best left alone.

Blister beetles can give severe burns and blisters when handled. They are known as “blister beetles” because they secrete cantharidin, a poisonous chemical causing blistering of the skin and painful swelling. Cantharidin is used medically to remove warts, and is collected for this purpose from species of the genera Mylabris and Lytta, especially Lytta vesicatoria, better known as Spanish fly.

Professor Clarke Scholtz at the University of Pretoria was asked, “Is it true that their poison can kill a human being?”

The answer was, “Yes; they are poisonous enough to kill people – especially a big beetle. They are claimed to have aphrodisiac properties. The poison is very toxic and actually causes collapsed tissue. It would also depend on the weight of the person, as with any other toxin. The poison of a CMR beetle, that is dried and powdered, is sufficient to kill a 70kg human”.

Well, we must of handled thousands of them and never got harmed in the slightest! People do get paranoid!

…there is a mimic too which I drew one sample of in the mix. I’m not sure if I should even ask if you can spot it. Its referred to as the Agelia petelii.

Here is another fascinating bit of info on the life cycle of the CMR:

The life cycle of Meloid beetles is rather remarkable in that they undergo hypermetamorphosis — a situation in which the larva transforms into markedly different stages between moults. The first stage (the triungulin) is small, active and runs around on the soil surface seeking out grasshopper egg pods that have been pressed into the soil. On finding one, it burrows into the soil and soon moults into quite a different type of larva which is stouter with smaller legs, and moves more sluggishly. The next two or three stages are in the form of fleshy C-shaped grubs that continue to feed on the eggs. The last of these burrows deeper into the soil before forming a resting stage at the end of the summer. When the warm weather again arrives, another active stage appears after another moult, and this soon pupates. The beetles are commonly seen from November to April, and may often be seen emerging and feeding in areas where locusts or grasshoppers are known to breed.